Sharing the Running Experience and My World of Architecture

Architects and runners spend a considerable amount of effort and energy planning for the future.  Architects need to have an overall understand of a project’s goals, schedule with intermediate milestone dates, and a game plan on how to reach the overall objective.  The same is so with runners. Runners, especially runners training to compete in a very significant event such as a marathon, need to know the target date, desired outcome, and have a plan on how to achieve their marathon goal.  The plan will likely entail at least 6 months of effort and include items such as long runs, speed work, yoga, diet, and intermediate races intended to check the progress.

While such planning often is the key to overall success, it is also crucial from time to time for both architects and runners to look backwards and carefully assess what worked and what didn’t work. Was the goal achieved? If not, why not? What can be done to improve the outcome next time?

So it is that I look back on my recent experience with competing in the Chicago Marathon last month.  My overall finish time was 3 hrs. 46 min. A very respectable and perhaps even an enviable finish time as I qualified to run the Boston Marathon in April 2016. Yet I had hopes for much better.  When asked by friends how I did in Chicago I tell them I had a fantastic first 20 miles or so, then the wheels fell off my buggy and for the remaining 6.2 miles or so it was not a pretty site.  This experience is referred to has “hitting the wall”.  While I have had this experience on occasion in other races of all distances it came very unexpectedly for me in Chicago.

So why? why went wrong? How did this happen and how to prevent it from happening again?  As usual there is no one simple answer, rather there are several reasons. I won’t bore you with the tedious details but will highlight a few so in case you are planning to run a marathon you can benefit from my experience.

One of many reasons is “Corral Envy”.  My marathon race application indicated that I was planning to finish in 3 hr’s 28. min. This was a very realistic expectation based upon my 3:29 finish in the NY City Marathon several years ago and a somewhat recent 3:33 finish in the Raleigh City of Oaks Marathon that included at least 600 ft of climb during the final miles.   Yet I failed to provide documented proof to the race officials, thus instead of being placed far ahead of the mass of runners in corral A or B, was assigned to corral D!  OK, my mistake, but at least I could get to the very start of that corral and besides, I knew I needed to be held back and start very slow, so starting with slower runners may be a blessing in disguise.

Speaking of disguises, I also found myself lining up next to a guy wearing a Big Bird costume!  Surely he was not planning to run 26.2+ miles on this sunny, yet cool Sunday morning in Chicago was he?  Stay tuned.

About 10 minutes after the official start of the marathon I was at the official start line. My timing chip (worn on the backside of the race bib) had officially been started and within the next stride I was starting my 9th marathon with 45,000 other runners.  If you have never participated in a mega marathon, or any marathon for that matter, the excitement at the start is difficult to express.  My emotions were very quickly reeled into reality with the first several yards of the race as my running shorts began to fall off!  Yes, once again, I made the mistake of packing too many energy gel packs in my race belt.  The only solution was to release them from the belt and carry in my hands. Past this near disaster I kept to my race plan and started very slow. So what if Big Bird was ahead of me already?

I hit my first 5k split time pretty close to my target of 24+ minutes. By close I mean I was faster than I had wanted to be. This is not a good place to be early in a marathon.  I decided right then that all I had to do was to hold this pace. Not a problem I told myself as I felt very relaxed, strong, and this pace felt very easy to maintain.  So it when, mile after mile, 5k mark after 5k mark. Each time when I looked at my watch expecting to see a slower than targeted pace, I was shocked to see that I was actually running much faster (7:37 +/-) then I had any business to run.

I tried to slow down each time!  I just never did.  I am not sure if this was due to the flat course, the ever present “Go Lee” from the throng of supporters that crowd the route, or what, I just kept going. Then as I approached the half way point I thought that perhaps I was on to running my fastest marathon in over 20 years!  Well, I was in fact on pace to do just that.  But as you seasoned marathoners know, this is not the way one should attempt to run a marathon. 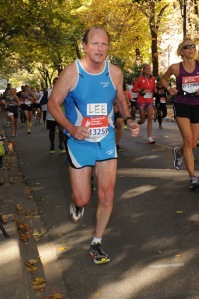 Between the half way point (13.1 miles) and the 20 mile mark, my inner thighs began to give way. They were “spent”.  A runner friend from my hometown who started ahead of me in corral B passed me. Good for her, she was running a very smart race.  Shortly thereafter I was passed by, yes none other than “Big Bird” himself.  Now I knew I was in trouble!  The final few miles weave through areas of the South side of Chicago where it is difficult for crowds to gather thus, the crowd support dwindled.  Until the final mile when some of the crowd support returned.  I was constantly given encouragement by those along the side of the road. They could obviously see I was struggling. I did my best to smile at them, by a wave of my hand I let them know I was fine.

Finally, I hit the last “hill” (all of a 10-20 ft climb) at about the 26 mile mark and then made the final turn towards the finish line.  The announcer called out my name as I finished and I was thankful this long race was finally over.  The finish area consist of a very long, very slow walk back to pick up your gear. The first volunteer wrapped me in a silver mylar blanket to keep me warm during a still chilly morning. There were many other volunteers offering everything from beer, protein shakes, and ice bags.  What I really wanted was a seat to sit down and rest.  I knew if I sat on the ground I would never get up! So I shuffled onto get my gear, then eventually the mile long walk back to the hotel.

Overall I had a very enjoyable experience the entire time I was in Chicago-Land.  From the huge but extremely well organized expo at McCormick Place, to the Pumpkin Fest in the suburbs on Saturday with family and grand kids, and the post race meal at a small but elegant restaurant next to our hotel. I thoroughly enjoyed the experience and learned even more.

Next time I will practice what I preach and train, plan, and run smarter.  Thanks for taking the time to view my post today.

Run Happy out there.